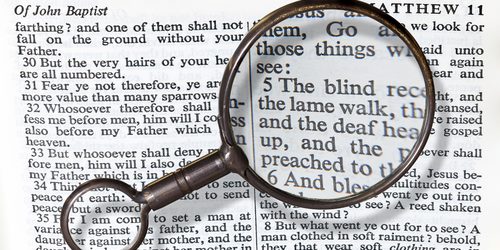 In a world of so many translations of the Scripture, many younger families may wonder why the John Nelson Darby Academy has chosen to use the King James Version exclusively. After all, wouldn’t it be better to select a version that the children can understand?

First, we should state that the understanding of Scripture is our primary goal. We believe that all truth is rooted in God’s Word, and when children know the truth, the truth sets them free from worldly ideologies that lead to dishonoring God. But we do not ascribe to the assumption that a simplification of language makes the Scripture more understandable.

Second, a simple translation fails to honor our core belief that the Bible is the word-based revelation of God. The theological term for this is verbal inspiration. This theological idea says that God gave us His revelation in words, not concepts, ideas, or pictures. We believe that the word-based revelation requires that we translate each word from the original text to English in the most precise, technical manner possible. The simplified translations are based on the concept of communicating the general idea rather than communicating the exact words. We reject this concept. In fact, this philosophy extends to our educational methods, and we give extra diligence to making sure that our students excel with words, both in grammar and syntax, logic, and rhetorical ability.

Third, a simple translation implies that the Bible is too complicated for the average person and out-of-reach for “the man on the street.” In order to give Biblical understanding to the masses, it must be dumbed down to their level. We believe that this idea is demeaning to the mental ability both of our students and of men, women, boys and girls everywhere.  We would rather teach-up than dumb-down.

Benefits of the King James Version

The use of the King James Version has several advantages.

First, we believe that it is the most precise English translation available. We teach our children the precision of the pronouns that are used only in the KJV (thee is singular while ye is plural, for example). We also recognize that words like propitiation and dispensation have been rejected by modern translations because they are complicated words. However, complication is often necessary for precision, and we believe precision is important. Mark Twain said, “The difference between the almost right word and the right word is really a large matter. ’Tis the difference between the lightning bug and the lightning.”

Second, the King James Version is the easiest version to memorize. The poetic and precise nature of the words force a child to put mental energy into the sentences, and this concentration actually simplifies memorization.

Third, we believe that significant theological issues are lost in many modern translations. For example, Psalm 1:1 in the KJV states, “Blessed is the man that walketh not in the counsel of the ungodly….” The NIV, however, says, “Blessed is the one who does not walk in the way of the wicked.” While these seem so similar, note that the NIV has made man into the one. The NRSV has gone a step further, and says, “Blessed are those…” thus not only removing gender (as in the NIV) but making the singular masculine into a plural neuter. A close study of Psalm 1, however, shows that the Psalmist is speaking of a certain man, and comparing him to the wicked (plural). We believe that the blessed man of Psalm 1 is the Messiah and not a reference to any godly person. The failure to allow the grammar to remain as-is causes the student of the word to completely miss this truth.

Fourth, the King James Version is an excellent tool for learning English grammar, because of its precision. Knowing that the suffix -est is second person and the suffix -eth is third person forces a child to learn pronouns and noun/verb agreement. Knowing the precision of grammar (I pray,  thou prayest, and he prayeth) is helpful in learning the parts and usages grammar, even though some of these precise prefixes, pronouns, and suffixes are no longer used in modern English.

The Use of KJV in our Curriculum

You will find that we often use Scripture passages as examples and supplemental material in each of our courses, not just in Bible classes. The daily use of Scripture helps our children understand that a fully-functional Biblical worldview comes from the Bible itself.

Note: Even though we only use the King James Version, we are not adherents to the King James Only philosophy. We teach that Scripture should be accurately translated from the original languages of Hebrew and Greek.